Sources close to the negotiations have told The Globe and Mail that teachers will be asked to vote on a six-year deal that includes total wage hikes of 7.25 per cent, which is similar to the offer that the government’s negotiators put on the table in June, and they will not collect the $1,200 signing bonus that was on the table at that time – that offer expired on June 30.

However the government is putting roughly $100-million into a fund that the union can distribute to its members to address the grievances from the 2002 law that stripped the contract of language on class size and composition.

The main victory for the union is that the government is creating a new education fund that will be used exclusively for members of the BCTF to address issues of class size and composition – the number of special needs students in each classroom. The government had offered to put more money into special needs supports, but had initially planned to share that investment with other educators such as educational assistants who are not part of the BCTF.

A tentative settlement has been reached as of 3:50 a.m. this morning. Details not being released at this time. #bced #bcpoli #canlab

Veteran mediator Vince Ready, who emerged from the Richmond, B.C., hotel early Tuesday morning after another marathon negotiation session, had this to say: “After all these hours I’m very pleased to announced the parties have reached a tentative agreement. I’m not at liberty to release any of the details, nor are the parties. The parties are going to meet later this morning and finalize a few of the outstanding details, but generally speaking there has been a tentative agreement initialed by the parties.”

A ratification vote is expected on Thursday, according to BCTF spokeswoman Nancy Knickerbocker.

So when might schools officially open again?  Vancouver School Board chair Patti Bacchus predicts it will take several days — after the vote — for things to get back to normal: “There is a lot of work and classroom/timetable organization that normally would have started at the end of June and been completed by now,” she said in an email.

“I know principals and VPs have being doing as much of that as they can and I understand the expectation is that we would open within a day or two of an agreement being in place (may require ratification etc). That could be part of the ongoing negotiations as well.

“However it unfolds, it will certainly take several days to get things settled to the point they would normally be at this time of year.”

Here’s our latest news story with developments in the deal to end the strike.

Government-appointed negotiator Peter Cameron takes a walk during a break from negotiations at the Delta Vancouver Airport in Richmond, B.C., on Monday night. (Ben Nelms for The Globe and Mail)

With a report from Justine Hunter in Victoria

Media staked out at the Delta hotel in Richmond, B.C., where teacher talks continue.

12:45 p.m. Hello from the Delta Vancouver Airport hotel in Richmond, B.C., where talks between the B.C. Teachers’ Federation and the B.C. Public School Employers’ Association are ongoing. Little news to share so far; fleeting sightings of BCTF President Jim Iker, BCPSEA’s chief negotiator Peter Cameron and mediator Vince Ready are being tracked and tweeted by media with the feverish curiosity of Loch Ness watchers. Mr. Iker has reportedly said the parties are going over proposals today, and there are whispers of a make-or-break announcement coming sometime this afternoon. Stay tuned.

1:30 p.m. Mr. Ready and Mr. Cameron spotted walking back and forth between two rooms. There are about a dozen members of the media here, and a mic stand is set up. Everyone seems to feel something significant will come out of today’s talks, but still no concrete updates.

2:55 p.m. Mr. Ready and Mr. Cameron walk by. The former smiles and waves; the latter does not. Mr. Cameron seems tired. Media wait with bated breath.

3:30 p.m. A flurry of almost-activity. A blazer-less Vince Ready wanders outside the front of the hotel, sending broadcast media in a frenzy. He is on the phone. When he hangs up, he walks over (on his way back into the hotel) and media ask him if we can expect an update today. “It’s too early to tell. I’m not going to say anything,” he replies. Someone asks who he was on the phone with. He says his grandmother. Chuckles abound. 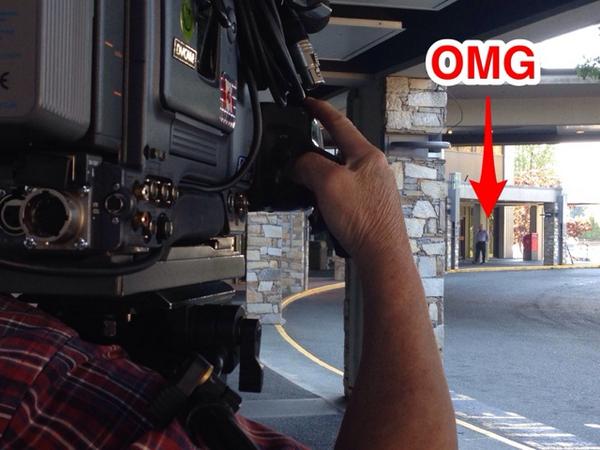 Vancouver school trustees Ken Denike and Sophia Woo are here. I asked why and Ms. Woo said she is eager to see what happens. Mr. Denike seems convinced “today’s the day.”

7:00 p.m. About one-third of media have cleared out and many of the others have traded off with coworkers. Some plan on sticking around until midnight, 1 a.m. One radio reporter tells me she’s here until 2 a.m., and if they’re still talking, she has to call in a replacement to take over. That’s some serious commitment.

There have been no updates since the last one — not even a Vince Ready sighting. Am told they’re eating now, and a government staffer is being replaced with another, which suggests a long night ahead. One BCed insider said he was pretty sure there would be a decision today, but of course, nothing’s for sure.

What to expect Monday from the B.C. teachers’ strike: More bargaining and a startling video

The weekend bargaining session that saw representatives from the B.C. Teachers’ Federation and the B.C. Public School Employers’ Association in talks behind closed doors at an area hotel will continue Monday. It’s the longest the two sides have met since the start of September in their efforts to resolve the strike that has postponed the start of the school year for more than half a million students.

As the parties left the table early Monday morning, where mediator Vince Ready was also present, they maintained a media blackout on their talks, saying only that they planned to resume negotiations later in the day.

According to the website Rally for Change, there are three events being organized for Monday:

At 6:30 p.m., another group is calling for protesters to show up with pots and pans to make noise for public education on the Cambie Street Bridge in Vancouver. This will be followed by a candlelight vigil. The organizers want participants to use the hashtag #potsandpans for social media updates, and more details can be found here.

An unexpected lift from Mother Nature

Perhaps this isn’t the kind of thing that can be expected to happen again, but this video from the picket lines posted Sunday shows a rather strange sight amid the hot late-summer weather. We knew things were being whipped up into a frenzy, but not like this.

With a report from The Canadian Press